*a soft sort of fluttering sound is heard just outside of The Dark Mansion , what appears with this sound , is not what one would expect , it is a girl with blood red hair and mysterious eyes , she has wings with many partitions to them , her clothing is steampunk style from her head to the boots on her feet , she hovers for a moment , wings fluttering like a hummingbirds , gazing at the mansion with her mysterious eyes , she lowers herself to the ground below , her black boots land softly on the course rock drive that leads to the mansion . After a moment or two she begins walking towards the Mansion , she walks with confidence , for she is expected * 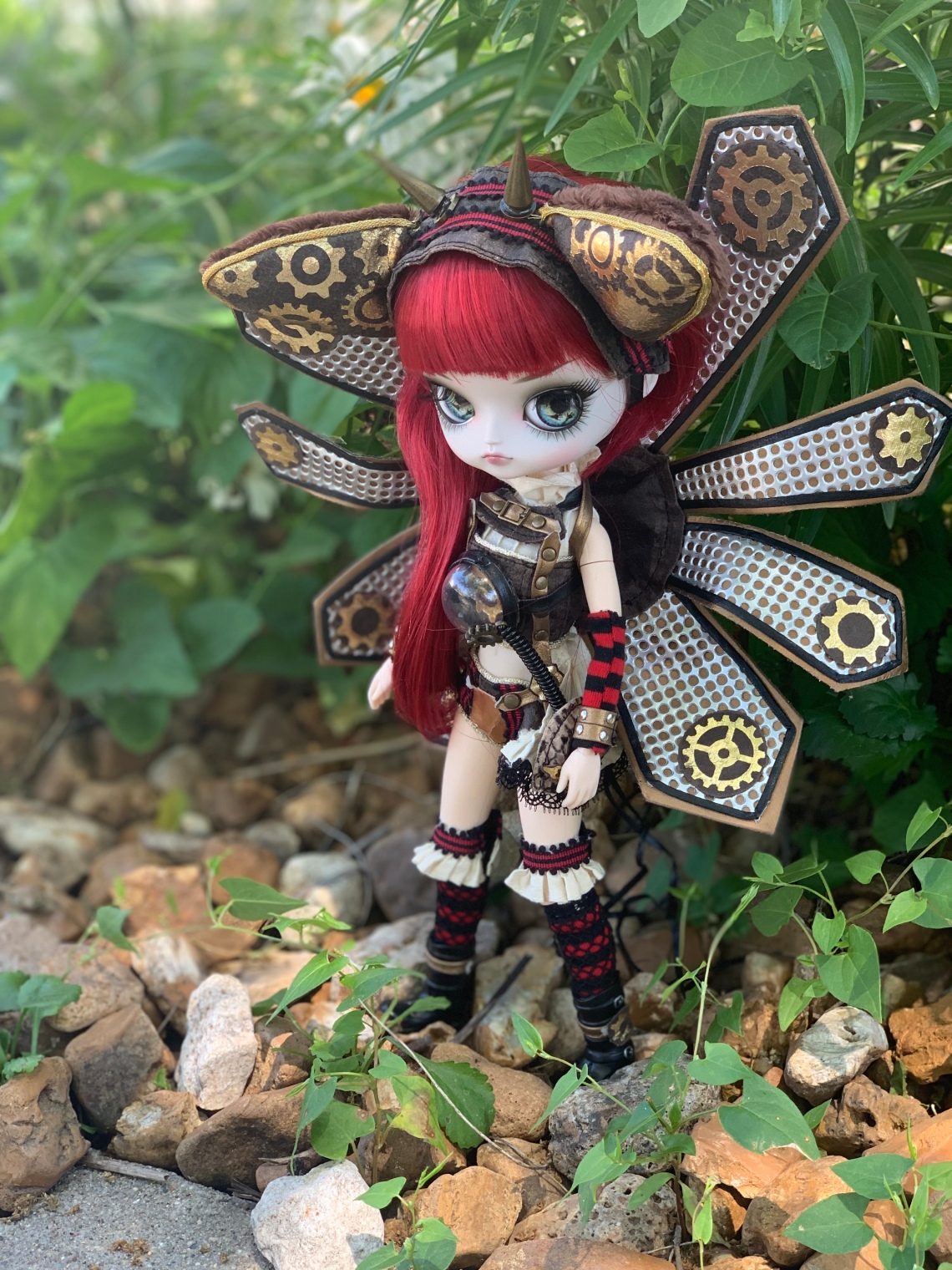 Darius~*peering out of one of the mansions large windows , sees her and quickly motions for his butler to open the door , he waits with anticipation for the girl to enter his home , he hears her footsteps and watches as she steps inside *

*the girl sees Darius and nods at him , her mysterious eyes seem to look through him , then gaze only slightly around the room , she walks to Darius , standing just before him *

Darius~*makes a kind of salute to her , then says with a grateful , relieved air * Thank you for coming Icarus , your expertise is required most urgently

Icarus~*as if knowing exactly who needs her , her eyes dart to the door at the top of the large staircase , where MeliB is , then looks at Darius , her voice revealing no emotion * Yes , there are remnants here , they must be removed immediately *without asking permission , for she knows her duty , she turns to make her way up the large ornate staircase*

Darius~*calls after her , sounding slightly panicked * please be gentle with her Icarus , she has been scarred terribly by what she has endured *his concern for MeliB very clear in his voice and in his eyes *

Icarus ~*pauses and turns her head only slightly and nods at him , then continues her ascent up the stairs *

Darius ~*watches her nervously , knowing he cannot observe , also wishing he had taken the time to warn MeliB about his sending for Icarus , she is so fragile emotionally , he mutters something to himself and begins to pace , his concern clear with each click of his shoes as he walks *

MeliB~*her eyes snap open as she hears a sound just outside her door , her hands clinging at the blanket at her chest , she grips it tighter as the door to her room opens , her heart beats wildly as she sees someone enter her room , an unknown someone , she freezes in terror wondering who they are , her mind in a whirlwind she takes in the appearance of the someone with panic in her eyes *

Icarus~*with a calm demeanor , holds her hand up towards MeliB , her voice gentle , she can see the terror clearly that her appearance has caused * I mean you no harm , I am Icarus

MeliB~*trembling terribly , she has trouble finding her voice , her knuckles now white from gripping the blanket she is clinging to *

Icarus ~*approaches MeliB slowly , her eyes never leaving her , her voice remains gentle * please , do not be frightened

MeliB~*her eyes still wide , finds a bit of her voice and asks timidly , in almost a whisper * why … are you … here …

Icarus ~*says gently and straightforward , her eyes staying on MeliB * to free you of the Shadows

MeliB~*looks frightened again , asks in a tremulous voice * how ?

Icarus ~*stands before MeliB , she says gently* I am a Shadow Eater , that is how *this statement to her , logically explains it all *

MeliB~*is still trembling , she cannot seem to make it stop *

Icarus ~*gently sits beside MeliB, reaches out and touches her arm , she shows concern at how frightened MeliB is still , she reaches to her belt and takes hold of something that looks like a mask with a short tube that is connected to a device on Icarus’s chest , shows it to MeliB * I will place this over your mouth and nose , the shadows that remain will be removed from you , it will not be painful

MeliB~*looks at the mask fearfully and then at the girl , she whispers , her voice trembling * I’m afraid

MeliB~*feels herself losing control of her own body , she finds herself being laid back into the bed , she can feel her heart racing , the mask being placed over her mouth and nose , but she cannot stop it from happening , then a swirling , glittering fog swims before her eyes , then as quickly as it happened , it is over and she can freely move once more *

Icarus ~*tucks the mask away once it is done , she looks at MeliB and says calmly * it is done *she stands , gazes down at MeliB , nods at her , then turns to leave the room *

MeliB~*watches as the girl leaves the room , she takes a deep breathe , unable to process what just happened , but she feels calm and she feels also as if a great weight has been lifted from her , one she herself was not even aware she was carrying *