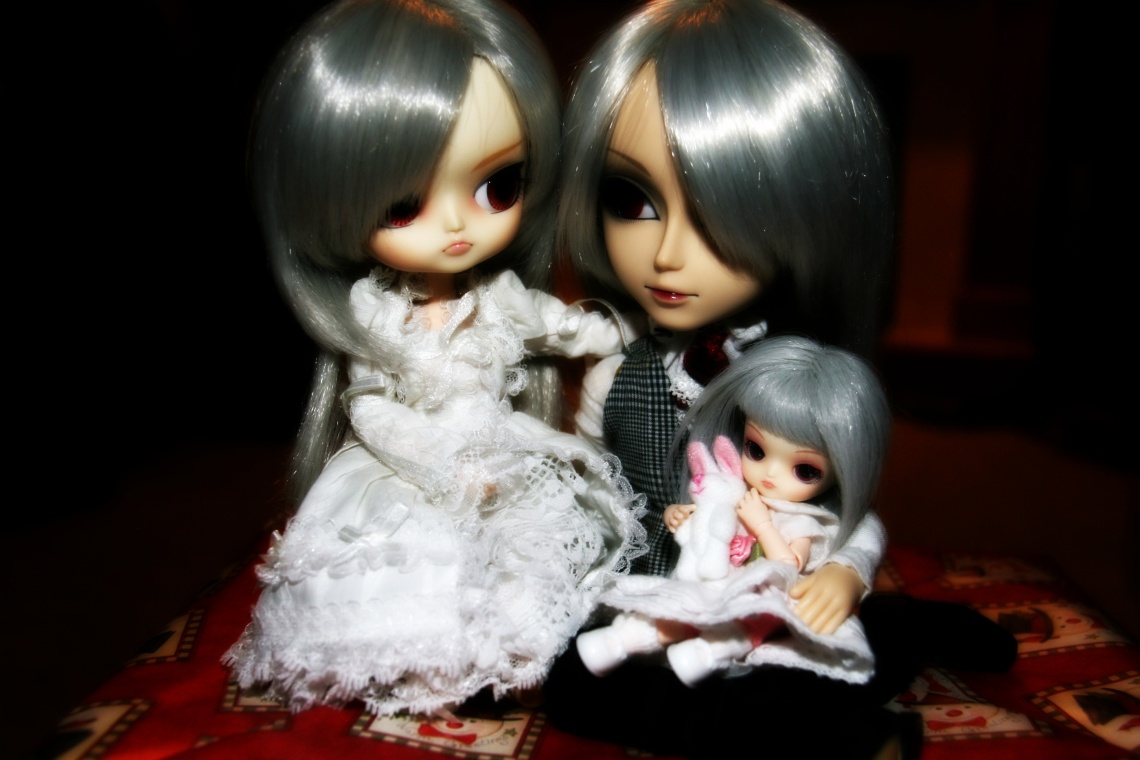 *in a library , in a lonely house that exists underground , sits a man , a very lonely man , his hands are entangled in his grey hair , his eyes are closed , one hand placed lovingly over a photograph , in the photo is himself a much happier looking man , a young girl with long straight grey hair and a tiny girl that also has long straight grey hair and holding a small white Rabbit , sitting on his lap , it’s clear that this photo and the people in it , mean something to the man , he has shed many tears over them , tears even now drip onto the arm of the chair he is seated in , he says one word , a word he has whispered countless times to himself in this lonely place * …. regret ……

*through one of the entry ways to this lonely man’s domain runs a ghostly rabbit , it leaps easily and flies over to him , it says in a whispery voice * master , Your daughter … she is alive …

*the man shakes his head and says in a disheartened voice , he has heard this before , it has never been correct , he knows bad things happened , he knows his family is dead , all of them and it is his fault ,he motions weakly with his hand * .. they are dead … all of them …*the image of his wife and baby Nadia in her arms floats into his mind now *

*the ghostly rabbit is persistent * Master , She is alive , I have seen her , she was on the rock plateau …

*the man sits up a bit , allowing himself a slight sense of hope in his heart , he asks in an emotional whisper * Nadia? *another image ,this of he and Nadia quickly forming in his mind*

*the rabbit whispers back * No … it is Noel

*he sits up so fast the book in his lap lands with a crash on the floor , he looks at the photo , his finger gently tracing Noel’s tiny form ,he whispers her name * Noel … my daughter….but how ? … *he stands suddenly , speaking to the rabbit as he tucks the photo into his waistcoat pocket * take me to the place you saw her !

*the rabbit obeys and zooms from the room , quickly followed by the man , the man’s heart becoming more and more filled with hope than he has ever allowed it to be *

*a rabbit hole opens up near the rock plateau , the ghostly rabbit leaps from it , followed quickly by the man *

*the man walks to the plateau , he looks out over the beautiful landscape , the water crashing on the rocks below , he says in a soft voice * this was Nadia’s favorite place , she loved to watch the waves crash on the rocks , when she was small she would beg her mother to bring her here *he kneels down and touches the ground with his finger tips , a portal was opened here , he can feel it , his mind tries to think , was Noel taken into it ? And where did it lead? *

For those of you who followed me on Flickr , this chapter contains a lot of familiar pics , lots of flash backs to Hellebore’s happier days with his family when they were alive . This is a story I have been longing to write , little did I know that one day the photos would serve such a purpose ❤️🐇