*the next morning a very friendly man shows up with a frazzled looking Darius , he has his arm around him , they walk to the stone cottage and he smiles at Wanda as she opens the door for them ,expecting them *

Wanda~*she smiles kindly at the two men as they stand at the door , she says softly , knowing why they are here * I believe the girls are ready *she looks worried , she looks as if she wants to say “we can’t send them to do this “ but she knows this is the only way , they are the only two that can stop the Clock master, he must be a very clever sort of person to keep himself hidden for so long *

Aldon~*smiles kindly, asking quietly * How are both girls , are they frightened about their task ?

Wanda~*thinks about this * they seem to know this is their moment , they know they are the ones , there is a definite connection between them both , especially when they touch each others hands , but beyond that I can only tell you how Mel is feeling , as I am connected to her and not to Margo and Mel is frightened yet determined

Darius~*still looking frazzled he says with urgency * the sooner we get this over with the better , if the girls are ready , We should get moving *he looks a mess and very uneasy , his eyes are blood shot as if he has not slept for days *

Wanda~*looks at him worriedly * are you alright Darius ? You look dreadful

Darius~*snaps at her , his frazzled state coming out in his words *I AM FINE *he rubs his hands through his disheveled hair , looking almost insane *

Aldon~*moves near to Wanda and pulls her close , whispering in her ear * he has not slept in days , he is very concerned about the girls confronting the Clock master

Wanda~*nods in understanding and approaches Darius gently , her voice also gentle * the girls will be fine , they are both very strong , much stronger than the Clock master and it’s his fault , they will defeat him and they will do it incredibly , you should see the skills they have in controlling not only time , but the space around them specifically . It is most impressive

Aldon ~*nods, notices Darius doesn’t seem to be able to compute what Wanda is saying  * I am sure it is *he is pleased that he will not have to test Margo’s blood Now , as he had to test Mel’s , for that is one of the reasons he was brought to help , these are the two girls and their mission is clear , they are the ones that can finally put a stop to things *

Mel~*walks into the room where They are all waiting , Margo walks shyly behind her , her hands folded in front of her , sleeves pulled down over her hands , she looks at her and smiles softly , then turns to the group * We are ready to do what we must .

Margo~*nods and stays close to Mel , feeling shy around Aldon , she doesn’t know him *

Aldon~*regards Margo for a moment and then says gently * Margo , it’s nice to finally meet you , I am Aldon , I will be one of your protectors

Remus~*suddenly pokes his head in the door* we better get moving , weird things are happening outside of this realm , I think the Clock master is aware that something is going down

Wanda ~*looks at both girls and putting a brave sound to her voice * alright girls let’s get this done , we will make sure you get safely into the Eternal Realm, the Rest is up to you *she looks at all the other protectors in the room and they all Nod , they are ready to follow her , she takes Mel’s and Margo’s hands in hers and leads them towards the door and then outside *

*the entire group make their way down the road in the Stone Realm , towards the location of the portal that will lead them out *

Wanda ~*stops before they get to the portal , she looks at the girls once again and takes a deep breath and leads them up to the impressive Gargoyle sentinel and it steps aside for her , the glittering midnight of the portal now before them , she bows her head to her fellow Gargoyle and leads the girls into the spinning, glittering midnight of the portal , the rest of the group following in tow *

*an odd sight appears before them immediately when they exit the Stone Realm , another portal appears , a ticking sound can be heard from inside it , then a whispering almost hissing voice calls out to them * Send the girls to me

Wanda~*looks at the group , questions in her eyes , what should they do , should they send them , is this a trick , will the girls be ok , this was a very unexpected move *

Aldon ~*seeing her struggle , steps forward and touches her arm , says gently * let them go through , the Clock master wants to call through his own destruction , let him , you know they are capable , together they can do anything*he can see the anguish in Wanda’s eyes that she is so desperately trying to hide from the girls , most especially Mel*

Wanda~*she tries to put on a confident look and turns to speak to the girls * it is time … *she looks once at Mel , the worry is there in her eyes *

Mel~*looks at Wanda , sees the worry in her eyes and she can feel it , she moves close to her , taking her face in her hands and presses her lips softly to hers , kisses her softly , then looks into her eyes and says gently * I will return to you , I promise

Wanda~*looks back into Mel’s eyes , tears brimming on the surface , she whispers * I Love you so much Mel

Mel~*smiles and hugs her tight , whispering back * I Love you too Wanda *she releases her after a moment and smiles at her once more , touches her face softly then turns and takes Margo’s hand *

Margo~*holds Mel’s hand tightly and nods , a look of determination on her face *

*both girls walk confidently into the portal that leads to the Eternal Realm , they disappear into the glittering midnight , the group of Protectors watch them go , each one with a look of worry on their face , the group links hands , they are ready to act if the girls should need them * 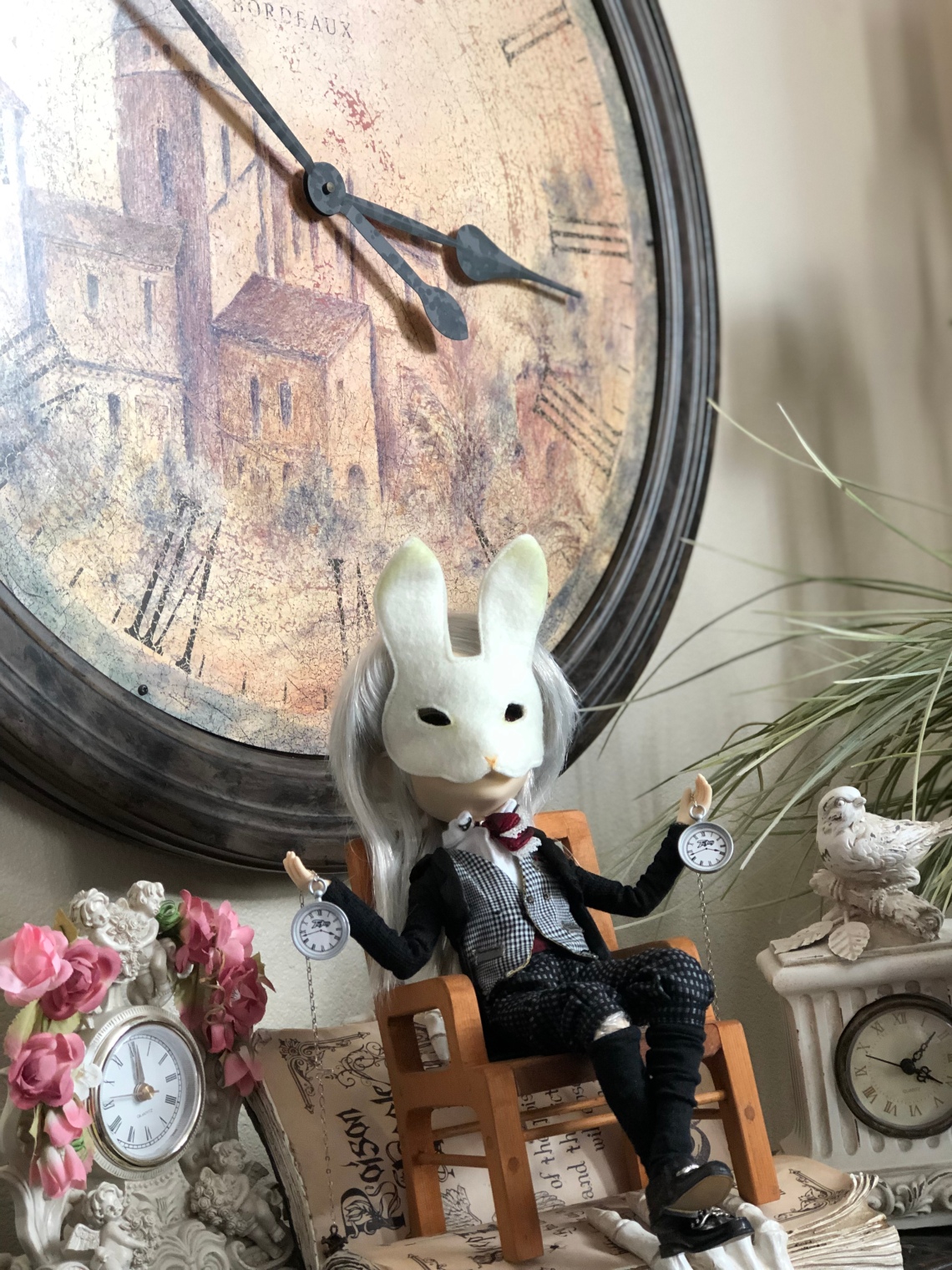 *when the girls enter the Eternal Realm , it is no longer as it was when Mel was brought here as a captive , it is now just a kind of throne room and in a place surrounded by clocks sits the Clock Master himself , in each of his hands he holds a Clock face on a chain *

Clock Master ~*wearing a white Rabbit mask , it is hard to see his expression , but his voice gives way to a smirk and he goes quickly into a story of sorts * hello my dears , thank you for gracing me with your presences , it has been so very long , do you remember when we first met? The day I chose each of you , the day I started controlling time around you , making your lives so much more interesting … giving you the “Alice” experience . *motions for them to come closer to him *

*both girls , holding tight to each other’s hand , stand before the Clock Master *

Clock Master ~*regards the girls once they are in front of him , he chuckles as they remain silent * oh ,have you forgotten the fun we had ? What a shame , well perhaps we can have fun Now , why do you want to go and ruin things by destroying me , I meant no harm , I simply wanted to make your lives more interesting and mine less so , by getting rid of my enemies you would have been doing me the most incredible service … *sighs *but instead you were whisked away and I could only do minimal things to make your lives interesting, even going so far as to “enlist” minions to accomplish my goals *regards Margo * except for you dear Margo , you completely vanished , how curious *then looks at Mel , the smirk back in his voice * but you my entertaining Mel , you were the model of what I intended , did I not make your life more interesting ? You met so many on your journey , A demon that pursued you and tried to kill you , how exciting that must have been , he even stole every soul from that sweet little orphanage you worked at , but your incredible powers were tested , I’m sorry that you almost died , but I would have truly never knew how powerful you could be until the Witch had her magic bracelet stolen and kick started all those wonderful things into motion when the Demon Darius placed it on your wrist , not knowing how much he increased your value to me , you are the model of a destructive force , why use it against me ? When we can Rule this world together !

*he snaps his fingers and suddenly the girls are standing next to him , the smirk back in his voice *

Clock Master~*his voice sounds triumphant * you see I can still control the space around you , I am so very clever aren’t I *he regards each girl , first Mel , a key is now in her hands * to you Mel , I give the key that winds the clocks , you can be my clock winder ? *then regards Margo * and you my dear girl can bring my tea , oh what fun we shall have together we three

*the two girls look at each other , an understanding passing between them , they slightly nod at each other , they each close their eyes and control the space around themselves , they are then seated in front of the Clock Master *

Clock Master ~*seems a bit startled at first , then laughs * oh clever girls , you also can control the space around you .. how.. intriguing, but then you are as powerful as I have designed you to be * he sounds less confident than before , but he still keeps up a bit of bravado * 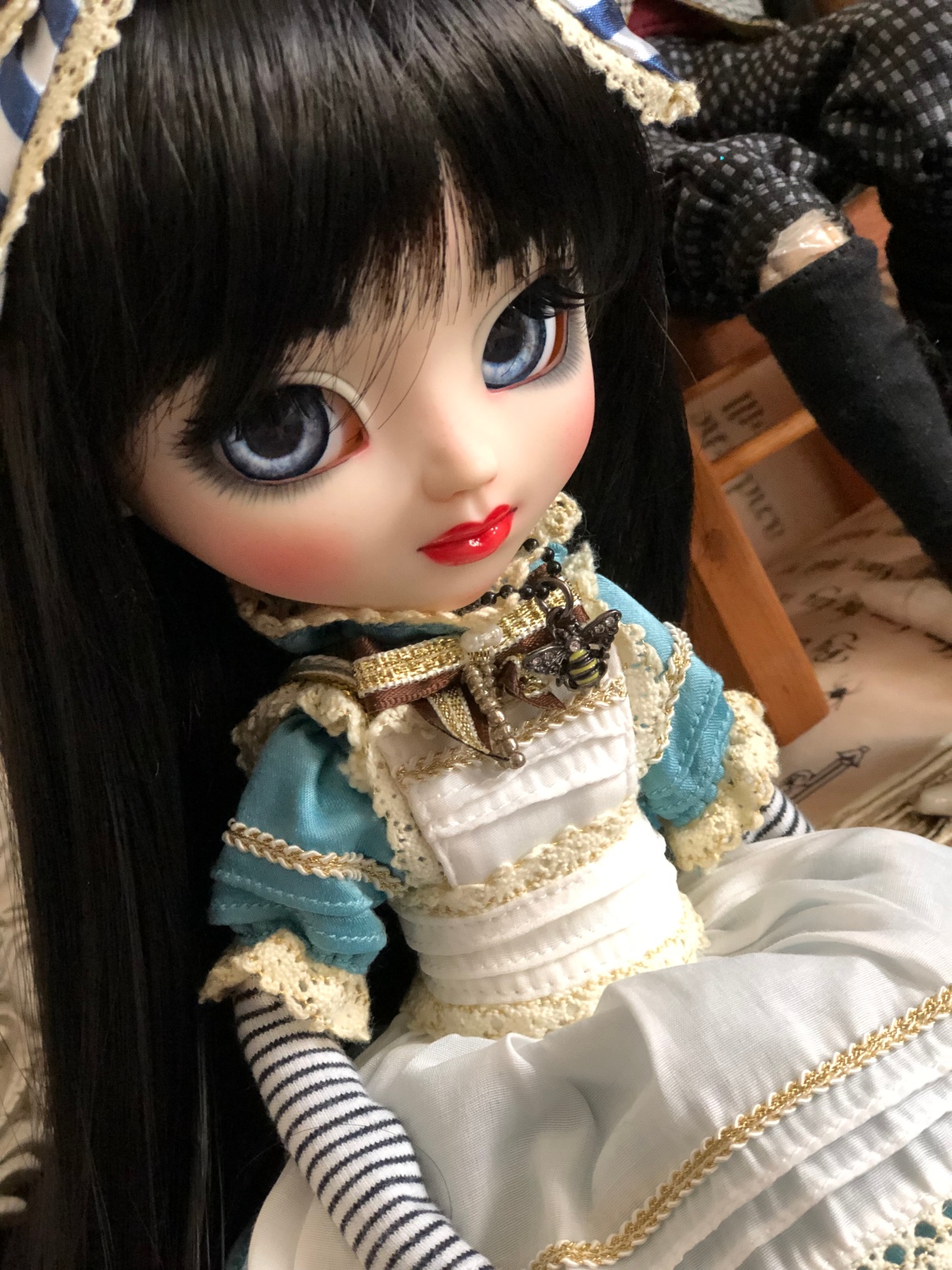 Mel&Margo~*they exchange a look with each other , their eyes telling each other what must be done next , they reach out to each other and grasps hands , suddenly the space around them shifts , then freezes , then explodes into tiny shards of time , the two girls are unaffected , they stand together and begin to walk away , a field of energy surrounding them , protecting them , they do Not even look back , but if they did , they would see a crack in each clock , and the clock master himself laying motionless and mask less on the ground , locked in time , it repeats around him , keeping him on the edge of life and death , the clocks he controlled them with lay strewn next to him , perhaps it would have been wise for the girls to take these with them ?

*they walk together out of this space , then they reach out with one hand each and at their command a new portal opens and they step through it , when they get to the other side , the portal collapses behind them , Wanda, Aldon , Remus and Darius are waiting for them *

Mel ~*runs to Wanda’s open arms and embraces her , kissing her with so much love , Wanda kissing her back with just as much *

Margo~*is suddenly embraced by Darius , he says to her with so much emotion * my daughter , you have returned to me *she looks at him with confusion , but hugs him back , curious to know what he means *

Aldon ~*watches the scene smiling , so happy all this ended well , he speaks to Remus who is standing next to him * I wonder whatever happened to Horatio ? Wasn’t he involved in all this ?

Remus~*regards Aldon and chuckles knowingly * I don’t think we need to worry to much about him ..let us just enjoy this moment of triumph *he watches the happiness of the girls and he smiles ,the girls are now free of the Clock Master and so is the rest of the world *